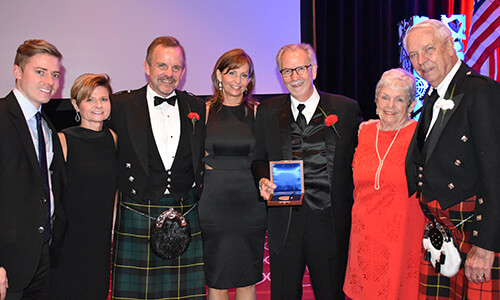 The entire Simpson Technologies family joins with the American Foundry Society to congratulate our friend Mr. Frank C. Headington of Neenah Foundry on being selected to receive the Peter L. Simpson Gold Medal at the AFS Casting Congress in Minneapolis, MN on April 17th, 2016. Mr. Headington was chosen as the recipient of this award by the American Foundry Society (AFS) Board of Awards for his outstanding career and service to the industry. Headington earned a Bachelor of Science degree in Metallurgy from the University of Missouri-Rolla. He then furthered his studies and earned both a Master’s of Science in Ceramic Engineering and in Industrial Management. Headington was also certified in Quality Engineering by the American Society for Quality.

Headington serviced the metalcasting field by holding many different roles that enriched his knowledge and qualifications. Headington was employed at John Deere Foundry as a Quality Engineer; he also had multiple roles at Wagner Castings Company in Decatur, Illinois. Some of these positions included Melt Foreman and Quality Manger. Following that, Headington became a Co-Founder and Executive Vice President at Sintered Precision Components. Headington currently is the Corporate Vice President of Technology at Neenah Foundry; and held several prior positions including Director of Product Reliability. All the experience Headington acquired by working in the metalcasting field contributed to his successes.

From when Headington entered the workforce to his current position at Neenah Foundry he held many roles and brought himself and all his employers’ great success. One of his many successes include Headington’s concept development of “Effective Copper” for controlling as-cast Ductile Iron casting hardness in an environment of varying residual element levels utilizing a simple “Alloy Factor” equation. He later presented this discovery at the Wisconsin AFS Region Conference (1997-2000) and further supported the advancement of the metalcasting field by sharing all his discoveries.

Headington advanced personally through the metalcasting field by challenging himself to find solutions, develop new methods and demonstrate outstanding leadership. As a result for all his efforts he received numerous awards presented by the National Science Foundry (NSF). Many of these awards acknowledged the collaborative efforts between himself, Neenah Foundry, Penn State University and Furness-Newburge on National Science Foundation Projects. A few of these projects included preventing the pollution of volatile organic compound emissions from green sand molding systems and the oxidation process for foundries that improves green sand performance and diminishes air emissions. Many of the projects Headington collaborated on provided innovative research findings that significantly evolved the metalcasting field. Not only has Headington participated in advancing the metalcasting field he also is an active member on the AFS committees. He has served on 4 committees and is currently serving on the AFS Research Board.

Simpson Technologies Corporation and the Simpson family extend our very sincere congratulations to Mr. Frank C. Headington for receiving the Peter L. Simpson Gold Medal for his lifetime of achievement and service to our industry.

For more about the Peter L. Simpson Gold Medal and a list of previous recipients please visit our website.